Methwold is a parish in the county of Norfolk in England, it has a population of about 1400 people and consists of Methwold village itself and the hamlets of Methwold Hythe and Brookville. The Parish is part of what’s called the Denton Ward area of King’s Lynn and West Norfolk.

Other than farming there are a variety of different occupations in Methwold. It is home to a funeral directors, an undertakers, more than one mobile hairdresser, an auction market, a post office, a village store, fish bar a butchers and the list goes on. Self employed individuals include; builders, plumbers, electricians, decorators, publicans, gardeners, window cleaners, financial advisors, solicitor, smallholder, coal merchant, secondhand car-dealer, beautician, secretaries, musicians, artists and many more that are constantly varying.

One of the two main businesses in the centre of Methwold is "Darby Nursery Stock Ltd", this business was formed in 1961 and is now one of the largest specialist container grown shrub and tree nurseries in the UK. Sites in the Old Feltwell Road and the Broad Fen Farm in Methwold Hythe provide some 2 million plants annually. In Methwold, Darby’s main office is situated in the Old Feltwell Road where there is plenty of land for the production process.

The second largest business in Methwold stands on a site that has played host to Howard Long International (HLI) and Fisher Chilled Foods in the last few years. HLI was taken over by Fishers after 40 or so years and they continued with the preparation of salad ingredients which were supplied nationally to McDonald's, Sainsburys, Asda, Waitrose, Littlewoods, Budgens and Gateway. After Fishers came the world renowned company Del Monte which continued with the tradition of food preparation and boosted the reputation of Methwold as a village of industry. In the past few years more changes have taken place on the site and it is now home to Premier Foods. 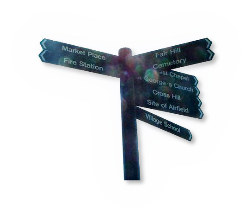 One of Methwold's proudest attributes is the auction market which holds a sale every Monday. The market is in the middle of the village about halfway down the High Street. On a normal Monday morning a large crowd is attracted to the sale of various treasures and other "curiosities", but on a Bank Holiday Monday the figure increases dramatically, people come from all around to see what is on the field, in the barn and shed, and of course what rarities are hiding away in the antiques section which is held in St. George's Hall. 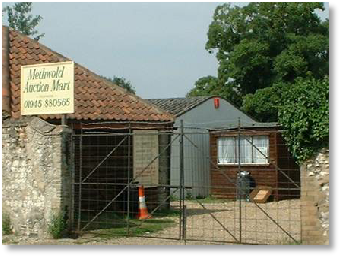 As well as the market people make use of the attracted crowds to sell any unwanted gifts and general bric-a-brac, stalls are set up in the car park of The George Pub or added to the collection of stalls in the large car boot sale behind the Social Club. These are in competition with the numerous "yard sales" that pop up on Bank Holiday weekends.

The only thing that causes grounds for complaint on a Monday is the absence of a public toilet, although the problem has constantly been a talking point for the Parish Council, unfortunately we are still toilet-less.

Even though it has been said that there is little to do in Methwold, especially for the younger generation, there is plenty of transport to other places in the near vicinity. Buses are run to Kings Lynn, Downham Market and Swaffham as well as various other places when the need arises. There is also a 'Dial-A-Bus' service for the less mobile.

School buses are becoming more widely used as the school expand to places outside of the surrounding villages and even out of the county.

The George is a freehouse and is approximately 200 years old and was originally an old coaching inn. The building is mostly brick and chalk and has had various names over the years including The George and Dragon and The George commercial Inn, we are now just The George and the only remaining pub in the main village of Methwold. Once upon a time it was one of eight in the parish. 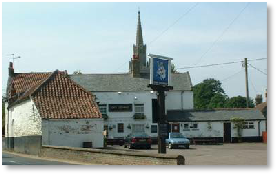 Methwold has a youth and adult football team competing in various games during the season, Methwold also put together a variety of teams to compete in the Inter-Village games held at Kings Lynn Sports Centre around the middle of June. Teams have had much success in sports such as Badminton and Bowls as well as Gymnastics for the children. This success is valuable as it makes a good name for the village.

Methwold Post Office, which closed in January 2008, is to re-open thanks to the efforts of local residents in conjunction with the borough and parish councils.

Methwold Community Action Group raised £9,000 in order for Post Office Limited to agree to re-open the Post Office. £4,000 was raised locally, and the borough council  stepped in to guarantee any shortfall so that the Post Office could re-open in late November that year. 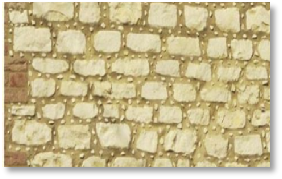 A high percentage of the older buildings in the village are constructed using a now rare building materiel, namely chalk or chalk clunch as it’s known. Much of this material was excavated from an area in the village itself now simply called “The Pit” 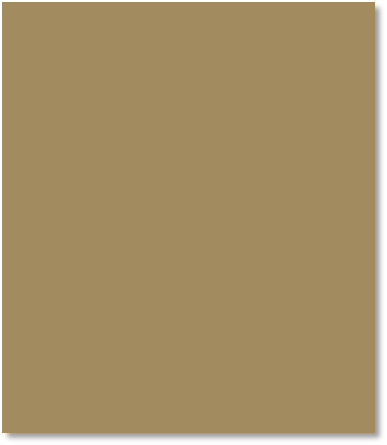 Right on the edge of the Norfolk fens, Methwold Hythe was once by definition a landing-place in a river; a harbour or small port. Just to the west of the main village of Methwold it boasts mostly residential housing but includes businesses such as one public house in that of The Green Man, a Motor Repairers & MOT testers, a Cattery & Dog Kennels, Fencing specialists and a number of farms and small-holdings.

Methwold parish is the second largest in Norfolk in terms of land, extending over 12280 acres. It currently has approximately 20 farms ranging from about 60 acres up to 1000 acres. Farming in Methwold and the surrounding areas accounts for a vast majority of jobs in the fens, even if people don't farm, a lot of the work is connected with the land. 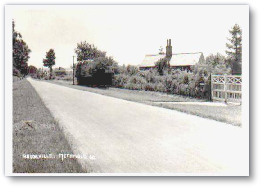 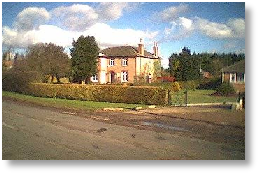 In conclusion it is easy to see that whatever your age and interest there is usually something for you in Methwold or the surrounding area. For the younger inhabitants there is a newly refurbished recreation ground that has recently been given a makeover thanks to relentless fundraising by the local community. It now holds state of the art climbing equipment, safe and durable play apparatus and a much voted for and coveted skate ramp. For the older (I mean wiser!) generation there is the Busy Bees Club who organize bingo, outings and much more. So if you’re looking for a village with something for everyone, Methwold is the place for you!!   ( Colin Marsland ) 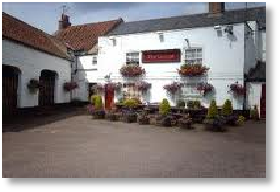 The origins of Brookville date back to 1889 when Robert Goodrich, a 48 year old London businessman decided to realise his ambition of getting "back to the land" to escape the tedium of Victorian life. Goodrich believed that it could be possible to live comfortably on 2-3 Acres of land whilst selling on the surplus produce.

Goodrich built a new house which was given the name of "Brook Glen" and set about planning the site for fruit, poultry and vegetable production. As the venture expanded, further land was acquired and within 10 years a total of 160 acres was established. This was subsequently divided up into 2 acre plots and the pattern of a whole new self-sufficient co-operative community had been established. The newcomers were mostly from the commercial world of London and to set themselves up needed around £500. For this the land could be bought and planted, a house erected and a well sunk leaving enough to live on until the produce was available for sale.

Fruit was the main product of the small farms, but there was also a wide range of other produce including vegetables, poultry, pigs and honey. On some there were even efforts to grow tobacco. Commercial ventures soon began to emerge and it was not long before four colonists pooled capital for a jam factory to process the surplus fruit. It was the marketing that was the colony's Achilles heel and it was difficulties in this area that led to it's ultimate failure as a "back to the land" experiment.

In 1912 a Post Office was set up and for simplicity's sake the colony's name was changed to Brookville. Today it is a very attractive hamlet, mainly residential, with farming of it’s surrounding land being maintained by the local larger farmers. (From information by John Younge, life long Methwold Man) 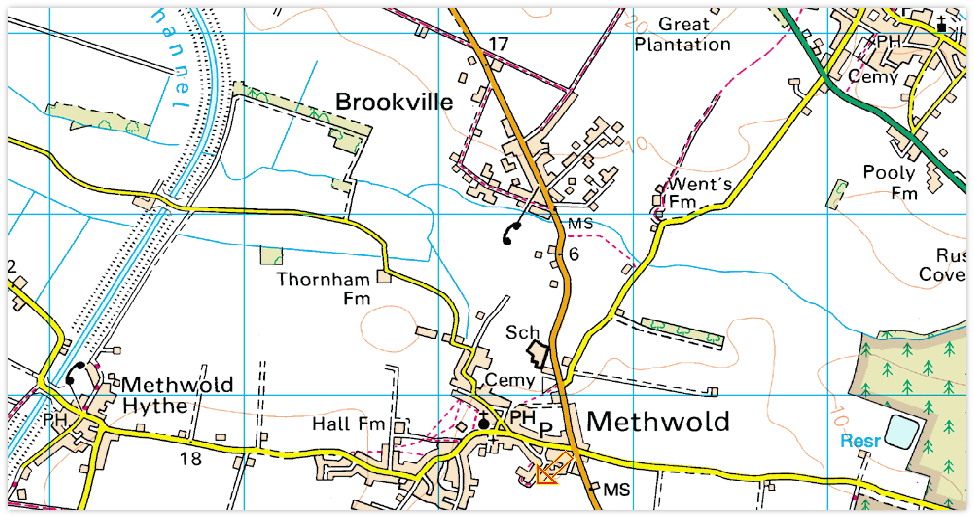 Situated just within the North West edge of the parish boundary is British Sugar’s premier Wissington Beet Plant, in fact, the largest beet processing plant in the world.